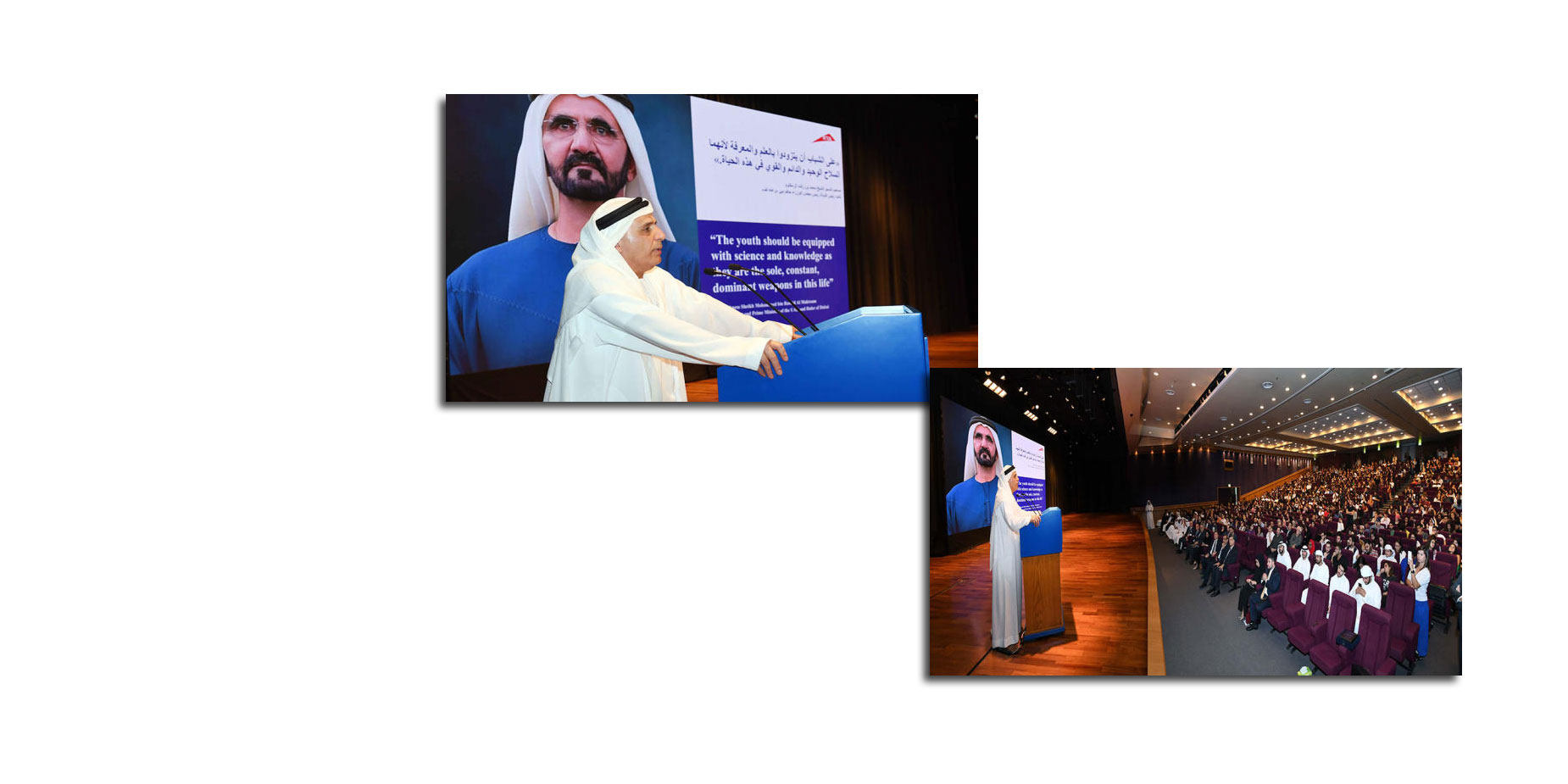 Role of Youth in the Future of Transportation

The university proudly welcomed H.E. Mr. Mattar Mohammad Al Tayer, Director General, Chairman of the Board of Executive Directors of the Roads and Transport Authority (RTA) to discuss the “Role of Youth in the Future of Transportation”.  Dr. Lance de Masi, the President of the American University in Dubai, warmly introduced Mr. Al Tayer who instigated the discussion with the key success factors of Dubai and how its competitive infrastructure has allowed Dubai to accommodate and embrace digital and technological innovations.

HE Mattar Al Tayer, stressed Dubai’s relentless efforts to keep pace with the future needs marked by accelerating improvements of roads and transport means in Dubai. He announced plans for protecting the environment, raising traffic safety level, and shortening the time of travelling from one place to another. “The Dubai Self-Driving Transport Strategy stands out of other global strategies as the transition towards autonomous transport in Dubai is driven by the Government, whereas it is the private sector that steers the process in other cities and countries,” Al Tayer said in a lecture delivered at the American University in Dubai entitled: The Role of Youth in the Future of Transportation.

“Moreover, the Dubai Strategy spans the entire public transit network comprising trains, buses; marine transport means and taxis in addition to private vehicles, whereas many countries are focused on a limited number of transit means. The Dubai Strategy involves a global competition for engaging advanced companies in smart mobility. Details of this Challenge will be unveiled at a later stage. The technological advancement of transport has opened new horizons for developing transit means such as the Hyperloop, driverless vehicles, and autonomous vehicles. All of these modes will be operating in Dubai, particularly as preparations for Expo 2020 are gathering pace,” he noted.

Reflecting on RTA’s achievements since 2005, Al Tayer praised Dubai’s contribution to ranking the UAE as Number One in the Quality of Roads worldwide over the past five years, according to the Global Competitiveness Report of the World Economic Forum in Davos. Additionally, road fatalities in Dubai have dropped from nearly 22 cases per 100,000 of population in 2006 to 2.5 cases per 100,000 of population in 2017.

Focusing on RTA’s future aspirations, Al Tayer said, “Our sights are focused on five transit means that set the global trends and bring in new technologies such as the driverless transport, creative transit means (Hyperloop, Air Taxi), shared mobility, and transport on demand. The implementation of the Dubai Self-Driving Transport Strategy will reduce mobility cost by 44%, curb demand for parking spaces by 50%, cut carbon emissions by 12%, and curtail traffic accidents and associated losses by 12%. It will also boost the happiness of people by offering them new mobility options.”

Commenting on the role of universities in shaping the future of roads and transport, Al Tayer called for contributions catered to the future of roads, and motivating students through competitions. He stressed the importance of students training exposure in their respective fields before graduation in order to grasp knowledge, which he considered much more important than making money. HE Mattar Al Tayer mentioned that he was inclined to study civil engineering on an advice of a University Professor in the USA that the UAE was in need of civil engineers. He referred to the principles adopted by the UAE to achieve global excellence, stressing that the successful leadership, free economy, and diversity had contributed immensely to that success.

Al Tayer concluded by citing a famous quote of HH Sheikh Mohammed bin Rashid Al Maktoum, Vice-President and Prime Minister of the UAE and Ruler of Dubai: “The youth should be equipped with science and knowledge as they are the sole, constant and dominant weapons in this life.” Introducing the lecturer, Dr. Lance de Masi, President of the American University in Dubai, praised the role model set by Al Tayer in making a paradigm shift in the transportation sector. The presentation culminated with the several questions and inquiries to HE Mattar Al Tayer.